The temporo-mandibular joint (TMJ) is located between your mandible (lower jaw) and the temporal bone (upper jaw). Temporo-mandibular dysfunction (TMD) can result from grinding your teeth, biting your nails, poor posture, or a mal-aligned bite. The preceding strain the TMJ and result in pain, stiffness of the jaw, temples, or ears, loss of jaw range of motion, clicking or cracking with opening or closing the mouth, or an abnormal bite. 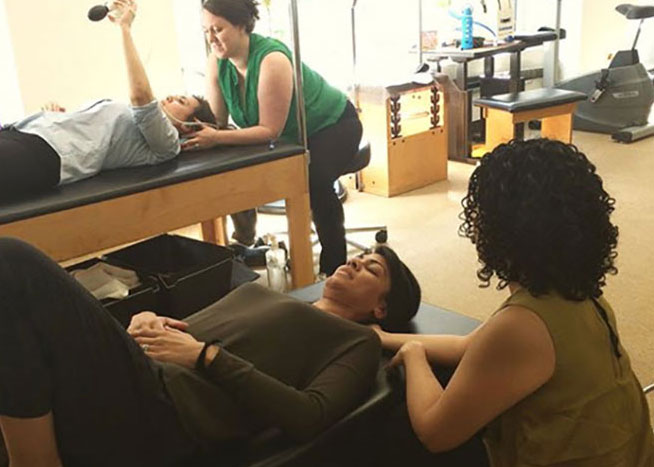 A 39-year-old woman with a history of night grinding, headaches, 4 months of jaw pain, and R jaw clicking with eating or yawning.

The patient could not fully open her mouth when she tried to fully open her mouth the lower jaw deviated to the right. She also had tenderness of the cheek, temple and neck muscles, and poor posture. Her dentist had fitted her for an appliance. She reported the appliance (worn only at night) eliminated 50% of her jaw pain.

Her treatment consisted of massage and stretching to the jaw and neck muscles, ultrasound to the right jaw, re-education of the jaw muscles (eliminating the right deviation), postural re-education, and neck/upper back strengthening.

Within 3 weeks (6 sessions) the patient could open her mouth in midline, with residual pain at the jaw’s end range of opening. Her chronic headaches (that she had never previously associated with neck or jaw tension) had decreased and her home exercises (for improved posture) were getting easier.

Within 6 weeks (12 sessions) the patient had full, pain-free jaw opening, no headaches, and decreased jaw/neck tension managed with self-massage and stretching techniques. Her posture had improved and she had begun to work with a personal trainer on upper body strengthening.

The above case history represents our “typical” patient. Obviously, results and duration of treatment can vary for each patient depending upon their age, the severity of the condition, diagnosis, and compliance with their Home Exercise Program.

A 31-year-old male sustained an acute injury to the L side of his face completely severing one branch of the L facial nerve. As a result, he was unable to move his L cheek and lip muscles, leaving him with a drooping face. His smile was asymmetric and he had severe difficulty with oral hygiene, eating, drinking from a cup, and enunciating certain words.  He could only chew on the R side and drink with a straw.  These modifications were not always successful, as food and drink would inadvertently drop out of his mouth. In addition, he experienced jaw pain and fatigue because he could not maneuver his jaw correctly.  His jaw range of motion was limited and lacked motor control.  The effects of the accident were catastrophic and embarrassing to the patient. The deficits severely impacted his role as a minister, as he felt he could not talk to his congregation. He did not want anyone to see his face, not even his family. He became severely depressed, anxious, and afraid to leave his home.  He stopped eating in public and would only leave his home wearing a baseball hat and large sunglasses.

He underwent facial reanimation surgery several years after the initial injury.  The process included harvesting a graft of muscle fibers with its nerves from an adjacent muscle (temporalis) and transferring it to the L side of the face.  The patient had two additional scar correction surgeries in the last stage of his rehabilitation.

Goals: Return to normal social activities, work as a minister and community builder, interact with the public, and on social media. To achieve these goals, he wanted to smile with confidence, enunciate words clearly, control liquids while drinking, and chew without pain.

We first saw the patient approximately 6 weeks post-surgery.  He presented in the practice with large dark sunglasses, a woolly hat pulled down low and a hoody, all covering most of his face. He reported severe anxiety when leaving his home and feeling insecure about his “new” post-surgical appearance. When the coverings were removed, his L face and lips were severely swollen. There were multiple facial scars. The scars were behind his ears, another scar reaching from his temple deep into his hairline, and at the lip. The scar at the lip was bulky, red, and extremely sensitive to touch. He reported that he felt intermittent L facial pain and a tremendous pulling sensation behind his ear and on top of his head. His new L muscle-nerve graft showed barely noticeable muscle activity.  Chewing and drinking were difficult due to gross swelling and minimal graft mobility.  He had difficulties enunciating certain words and consonants clearly and his smile was grossly asymmetric. Opening his jaw for dental hygiene was a problem due to the severe scar restrictions at the L lip corner. It was our assessment this patient needed 4 areas of assistance: 1. Reduce post-surgical swelling. 2. Increase scar mobility. 3. Increase jaw ROM. 4. Retraining of the facial muscles and nerves.

To manage the multiplicity of competing goals, we needed to prioritize. In this patients’ case, we prioritized reducing swelling and pain and increasing scar mobility as it was impairing and inhibiting muscle use for facial expression and jaw function. Therefore, initial treatments focused on reducing his severe facial edema and sensitivity, scar size, increasing facial muscle mobility, and jaw range of motion. All of this was important, not only from an aesthetic perspective but to allow the facial muscles and joints to properly function. Once the initial physical constraints were reduced, we could begin retraining his muscles and nerve graft. I started the treatment using a combination of manual techniques such as lymphatic drainage, progressive scar desensitization and mobilization and jaw muscle stretching.  This resulted in significantly increased the space between the cheek and teeth, which allowed for more effective intra-oral manual soft tissue mobilization of the facial and jaw muscles. While eliminating the initial “roadblocks” to his recovery, we introduced gentle and small facial movements with clinician guided assistance and mirror biofeedback.  Why start facial movements now? Because it’s almost never too early to start moving!

As his pain and swelling lessened, he was able to tolerate more focused activation and training of his muscle graft. We incorporated electric stimulation to elicit muscle contractions and make his efforts more successful. We also used the principles of proprioceptive neuromuscular facilitation (“PNF”). This is a form of manually guided or resisted muscle training and motor re-education techniques to assist muscle activation and movement. With PNF a skilled clinician may manually stimulate, or “facilitate” a muscle group that is weak or unresponsive or conversely “inhibit” a dominant group of muscles that you don’t want to be firing. In addition, we used Kinesiotape to increase graft activation and assist with facial expressions, such as smiling. We taught the patient how to apply kinesiology tape over the graft to further encourage muscle reactivity when he was at home.

Jaw stabilization and coordination exercises were added to address his chewing deficits, as well as improve his jaw opening range of motion.  Scar mobilization, especially to the lip, which had multiple surgical attachments, was on-going throughout most of his time in treatment.

After a few initial treatments, the patient reported greater ease with dental hygiene.  The electric stimulation, PNF and Kinesiotaping for muscle re-education gradually resulted in independent graft contraction. The patient started gaining oral function, such as eating, drinking, and clearly enunciating words. As he gained function, his outlook became more positive and he felt less need to hide his face. He started to go for walks outdoors with his wife.

Continued scar mobilization and stretching on his scalp and head significantly decreased the uncomfortable pulling sensation and its sensitivity. By the midpoint of his rehabilitation, he was able to produce more natural and spontaneous facial expressions, which continued to improve throughout treatment. This was a turning point for the patient. He started to believe, that he could regain an undistorted and normal smile.

When we discharged the patient, he felt comfortable enough to go outdoors without sunglasses and eventually without his hat. He was able to produce a symmetrical and spontaneous smile toward the end of his treatment period and was extremely satisfied with his results. This patient’s dedication to the process and his return to his old life was very rewarding for everyone involved!

Call Now
Back to the top